For many of us, music is timeless. It evokes emotion, transports us through history, and is a fundamental part of our lives.

The more time that passes and the more technology that seeps into our world, the more I fear for the future of music. The very future of the thing I love so much I could cry. Will all future “artists” use auto-tune? Will record stores cease to exist? Will resurrecting the dead as holograms become so common that we will be able to witness Mozart’s concertos or Kurt Cobain sing “in person” on any given Saturday? 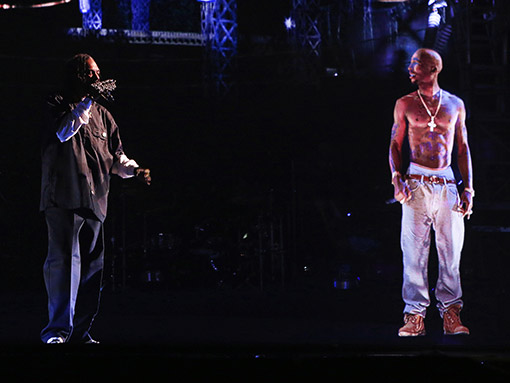 With the rest of the world, I watched the hologram of Tupac at Coachella.

My immediate thought was that it looked so real. The technology was amazing. Much better than I thought we were capable of in 2012. But it didn’t sit quite right with me. At the time, I couldn’t put words to my mix of thoughts and emotions. Were his movements slightly “off?” How much of his voice was the real Tupac? Did his family “okay” this? Is this appropriate?

Tonight, sometime later, I’m able to put what I was feeling then into words: There are some things you just can’t resurrect. Individuality, raw talent, and emotion are a few of them. It’s the “it” factor. The thing that makes us weep, stand up, and feel alive. You can’t resurrect the soul.

Some disagree with me, and that’s okay. I know people who would rather see Freddy Mercury in concert as a hologram than not at all. Never say never, but I can’t imagine myself joining them at a show. The soul of Freddy Mercury and other artists we’ve lost lives on in their records. Putting a fake — albeit lifelike — visual to that soulful, real audio doesn’t mesh. It doesn’t blend. It doesn’t make sweet, beautiful music together.

When I was finished watching the video of hologram Tupac at Coachella, my heart sunk with the fleeting thought of every artist we’ve ever loved and lost being resurrected as holograms. And not all with what I feel were the pure intentions of Dr. Dre, Snoop, and Tupac’s family. For cheap reasons. Greedy reasons.

I read today that my favorite trio, TLC, is planning a major tour with a hologram Left Eye, and now I feel as though my fears of a trend forming are coming true. This trend will begin with deceased artists’ collaborators, friends, and blood. It will end with something reminiscent of the dark, bad scenes in Back to the Future. The future where Biff rules and nothing is beautiful anymore.