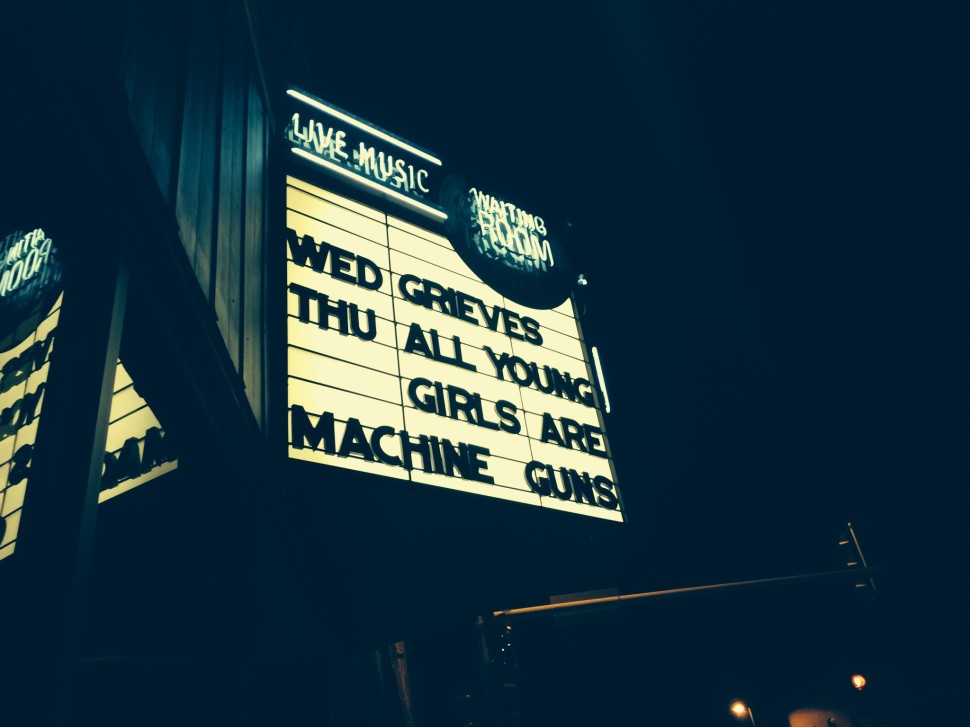 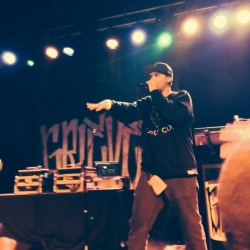 If you haven’t caught wind of it through the hip hop pipelines, groovy Rhymesayers lyricist Grieves is currently touring thestates with Canadian group Sweatshop Union and Def3. This past Wednesday the tour made a stop at The Waiting Room.

I have a deal with myself to support every Rhymesayers artist that rolls through Omaha, so we made the hump day drive across town, and even got their early to snag my favorite high-top table near stage right.

Too early. Doors were locked for private sound check (lame), and I found myself cursing the door girl under my breath for being on the warm side of the glass.

Once in, I open a tab and claim my special secret spot, Corona in hand.

Approximately one hour and two beers later, Def3, another Canadian rapper, grabs the mic, welcomes the crowd, and gets things started. He starts rapping, and a flutter of excitement rolls through me. This dude is GOOD. Good enough for me to scour Spotify and iTunes looking for his tracks the next day. The row of kids up front are just sort of staring up at him, so I jump up and start rocking out behind them. It’s permission enough for them to start moving. I feel breath on the back of my neck. Others are joining in. Finally, a crowd is starting to form and do this opener justice. 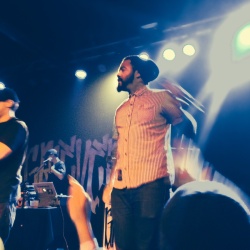 Def3 apologizes for his voice, raspy from being ill, but I barely notice. I’m paying attention to his flow, which doesn’t seem affected. It’s tight. He looks down at the kids vibing to his songs and smiles through the lyrics. He’s passionate about what he’s doing, and it shows. He plays only a few songs to get the crowd warmed up for Sweatshop Union, but it’s enough to leave an impression. (Note to self: find out more about this guy.)

Sweatshop Union comes on and plays all the songs I was hoping they would. “MakeshiftKingdom” and “Bill Murray,” among others. I think I was more excited for this group than the headliner. They played a great set, and I think the cool thing about seeing these guys live is that they have charisma. The type of rappers that you can’t take your eyes off of and find yourself studying. Each talented on their own but also magnetic as a group. Living Legends stylee.

By the time Grieves comes on, the crowd is ready. He has a pretty unique sound. Poppy hip hop infused with groovy, sensual singing. The crowd is vibing and dancing. My girl Quinn drags me up front. We stand next to the backstage door, which gives us a nice side view of the stage. Grieves is happy and feeling good, playing “Light Speed,” “On the Rocks,” and others.He interacts with crowd, laying down funny one-liners between songs and grabbing kids’ cameras and singing into them to give them a close-up shot of the Grieves-eye-view. 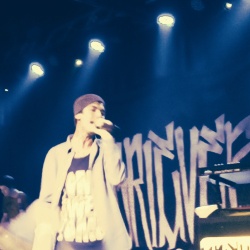 All in all, I had the most fun I’ve had at a show in a while. In short, I felt like I was hanging out with my friends all night, and what’s better than that?

There are only a few stops left on the tour (I’m looking at you, Wyoming and Montana). Doyourself a favor and pay the $12 cover for a fun night of love and hip hop.

And boys, you can come back to Omaha anytime you want.

back on my grizzly tourdef3grievessweatshop union