A Night Out with R.O.E., J. Slikk, and The Soulvillians 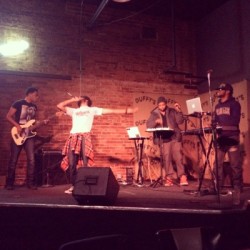 Lincoln, Nebraska had a special crew roll through Wednesday night. Hailing from Chicago, R.O.E. and The Soulvillians (Rob on the bass, and Rashad on the keys) with DJ/producer J. Slikk took the stage at Duffy’s Tavern.

The show kicked off with Omaha’s Conchance on the mic and Kethro on the turntables. It was a lot of Midwest talent under one roof, and the chemistry was unmistakable. It wouldn’t surprise me if these guys end up collaborating more in the future.

It was a lot of Midwest talent under one roof, and the chemistry was unmistakable.

4 Reasons to catch R.O.E. and The Soulvillians on the Road

1. It’s a show. These guys are charismatic entertainers who are no strangers to the stage and will put on a show. The addition of live musicians alone always takes it to another level. The thing I love about watching R.O.E. is that while he’s very into the moment, he’s calculated. You can tell he spends time on his craft, rehearsing and thinking things through. There is a clear chemistry and kinship between R.O.E. and J. Slikk, who is just as enthusiastic to be there as the MC. The way these two vibe off each other, it’s clear they’re in it purely for the love of the soul.

The addition of live musicians alone always takes it to another level.

2. They bring the funk. Instead of me trying to relay the experience, check it out for yourself:

3. You can feel the passion and sincerity. These are gracious artists who are genuinely thankful for every person that comes out, and they love what they do—if not evident by their eight-hour drive across state lines earlier that day, then through the positive vibes they exude while performing. And they interact with the crowd while onstage and give love to the local scene.

4. The talent far exceeds the cover you’ll pay. One of my favorite parts about the underground is being able to catch some talented people at a time in their careers when they self-promote, run their own merch table, and talk to the people who made it out to the show. I would lump this tour in with those that you’ll someday look back on and regret you didn’t go to back in the days when they were smaller gigs.

I would lump this tour in with those that you’ll someday look back on and regret you didn’t go to back in the days when they were smaller gigs.

Watch R.O.E. and The Soulvillians perform “I Won,” a J. Slikk-produced track off the A Backpacker Named R.O.E. album that earned radio play and press attention:

All in all, this is not a group to be missed. Catch R.O.E. and The Soulvillians with J. Slikk on one of these upcoming dates: