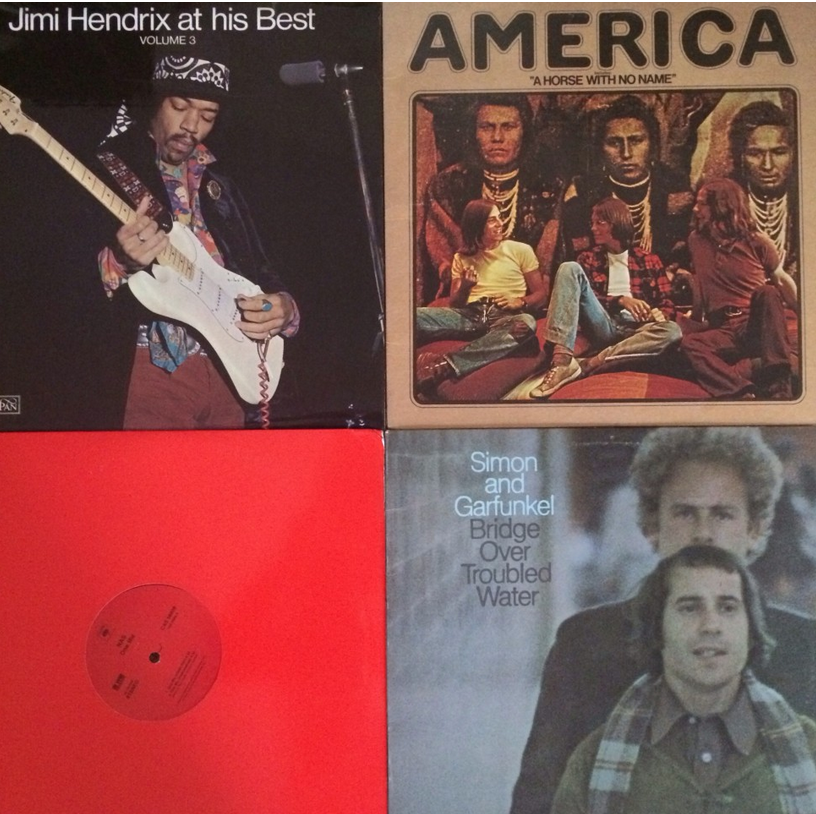 There are some songs that just feel good to listen to when you’re traveling. Especially when you’re traveling solo. There’s something special about discovering someplace new or rediscovering someplace you already love and experiencing a new culture’s idiosyncrasies, and there’s something nostalgic about being away from home. Away from the people you love and city you know. In those moments, when that feeling of appreciation for where you are at a certain moment in history starts to wash over you and you slowly realize how small this world really is and how many different lives you could live in this lifetime, there’s a certain kind of soundtrack you can listen to to amplify the feeling. Here’s one such playlist.

The thing I love about this song is it’s a great description of touring and really just the early days of getting to play around and introduce people to your music. It’s those early underground days that we as music enthusiasts always cherish because there’s a certain level of discovery and nostalgia that we get to be a part of. Like when Nirvana came to the Waiting Room and played for $10. Imagine being at that show. In “Travel,” Slug gives shout-outs to all his homies around the states that he’s collaborated with and stayed with and had drinks with while on tour, and talks about his favorite parts of touring, favorite places (“Chicago I don’t even know where to start, every time I leave your parts you keep a piece of my heart”), places he avoids (“And out West, the weather’s blessed, but I could never mess with ya’lls earthquakes, I’m trying to live to see another birthday.), and places they hadn’t yet played (“New York, New York big city of dreams, get with me when you’re ready to be a part of the team.”). It’s bound to strike a chord with anyone who’s ever toured ever and people deep in the underground scene.

“We all trying to get there, but the truth is we can’t alone.”

“I travel with Ant, we travel at the speed of tongue, no matter where I’m at I don’t forget where I’m from.”

“America” by Simon and Garfunkel

“America” will be enjoyed by anyone who can appreciate leisurely, carefree travel, particularly during the 1970s, a time in history immersed in free love, social experimentation, and music. Think about backpacking across a foreign country (to Simon and Garfunkel, that would be America) with friends in the middle of the hippie era. This song paints a vivid picture that will resonate with anyone who’s ever traveled long hours by car or bus, staring out the window, and listening to music while savoring a cigarette.

“Let us be lovers we’ll marry our fortunes together. I’ve got some real estate here in my bag.”

“Michigan seems like a dream to me now. It took me four days to hitchhike from Saginaw, I’ve gone to look for America.”

“Toss me a cigarette I think there’s one in my raincoat. We smoked the last one an hour ago.”

“Just a Song Before I Go” by Crosby, Stills, and Nash

This is one of those songs that opens up with a guitar riff that goes straight to your heart. Good luck not falling in love with this timeless piece of songwriting by some of the greatest songwriters who ever lived. “Just a Song Before I Go” is a must-listen if you’re leaving a lover behind for a tour.

“Just a song before I go, to whom it may concern. Traveling twice the speed of sound, it’s easy to get burned.”

“She helped me with my suitcase, she stands before my eyes, driving me to the airport, into the friendly skies. Going through security, I held her for so long. She finally looked at me in love, and she was gone.”

Tapestry was my first-ever album, so I’m a bit partial to it, but I can tell you that I think Carole was missing someone when she wrote part of the album. “Home Again” is one of my all-time favorites by the songwriter and one that will resonate with anyone who goes away from home for long periods of time because of their livelihood.

“Sometimes I wonder if I’m ever gonna make it home again. It’s so far and out of sight. I really need someone to talk to, and nobody else knows how to comfort me tonight.”

“I won’t be happy ’til I see you alone again, ’til I’m home again and feeling right.”

“Always Coming Back Home to You” by Atmosphere

This is a classic song Slug wrote about traveling across a city by foot and telling a story of what he sees along the way. And I believe most of it was imagined, which makes it even better.

“I walked past with a nod and a reminisce, I swear to God hip hop and comic books were my Genesis.”

“Before I was a germ learning how to misbehave, all the way to the grave, Southside is my resting place.

“I took a ride to Lyndale, I’m gettin’ near, but then the road became empty and the people disappeared. The clouds ran away, opened up the sky, and one by one I watched every constellation die. And there I was, frozen, standing in my backyard, face-to-face, eye-to-eye, staring at the last star. I should’ve known, walked all the way home, to find that she wasn’t here, I was still all alone.”

“Save Tonight” by Eagle Eye Cherry

90s alternative rock is a not-so-guilty pleasure of mine, and “Save Tonight” was a classic contribution to that sound. The lyrics center around making the most out of your last night with someone.

“Go on and close the curtains. “Cause all we need is candlelight. You and me and a bottle of wine. I’ll hold you tonight.”

“Well we know, I’m going away, and how I wish it wasn’t so. So take this wine and drink with me. Let’s delay our misery.”

“Save tonight. And fight the break of dawn. Come tomorrow, tomorrow I’ll be gone.”

“It ain’t easy to say goodbye. Darling please, don’t start to cry. ‘Cause girl you know I’ve got to go, and Lord I wish it wasn’t so.”

“The Load Out” by Jackson Browne

This is one of those songs that routinely gives me chills. First, it’s just a really well-written song, but it’s also reflective of what life on tour is really like written from the perspective of someone who is truly passionate about what he does. And the nod to his roadies and the people who make things happen behind-the-scenes is honorable. He’s just such a good guy…I’m going to name my son after him. Partially after him; mostly after Jax from Sons of Anarchy.

“And when that last guitar’s been packed away, you know that I still wanna play. So be sure you’ve got it all set to go, before you come for my piano.”

“But the band’s on the bus, and they’re ready to go. We’ve gotta drive all night and do a show in Chicago. Or Detroit, I don’t know, we play so many shows in a row. And these towns all look the same.”

“We just pass the time in the hotel rooms and wander around backstage. ‘Til those lights come up and we hear that crowd and we remember why we came.”

“We’ve got time to think of the ones we love while the miles roll away. The only time that seems too short is the time that we get to play.”

“Mekong” by The Refreshments

Ugh. “Mekong.” I just love this song. I like to use the chorus as my go-to toast speech. The melody goes straight to my heart. It reminds me of dreary nights I’ve spent alone in pubs.

“New glass here for this new friend of mine. Forgive me, I forgot your name. Flip a coin, what shall we talk about? Heads I tell the truth, tails I lie. Well I came all the way from Tapei today, now Bangkok’s pouring rain, I’m going blind again, and I haven’t seen my girl for 15,000 miles.”

“Is it true it’s always happy hour here? If it is, I’d like to stay awhile. Well as cliche as it may sound, I’d like to raise another round, and if you’re bottle’s empty help yourself to mine. Thank you for your time, and here’s to life.”

Scott Weiland has said that this song deals with a number of themes, including dishonesty about drugs and relationships. It may not be directly about travel, but to me, it the epitome of the escape song.

“Leavin’ on a southern train. Only yesterday, you lied. Promises of what I seemed to be only watched the time go by. All of these things you said to me.”

“Boys Are Back in Town” by Thin Lizzy

This is one of my go-tos for when friends who have moved away over the years come back in town and everyone’s reunited. There are some people you’ll just be friends with forever. This song is for them.

“Guess who just got back today? Them wild eyed boys that’ve been away. Haven’t changed or got much to say, but man I still think them cats are crazy. They were asking if you were around, how you was, where you could be found.”

“And that time over at Johnny’s place, well this chick got up and she slapped Johnny’s face. Man, we just fell about the place. If that chick don’t wanna know, forget her.”

“The jukebox in the corner is blasting out my favorite song. These nights are getting warmer and it won’t be long.
Won’t be long ’til summer comes.”

Say what you want about this song, but I think it lives and breathes freedom. Being trapped and locked down, knowing that you need to leave now or you never will, and actually doing it and really tasting life for the first time would be an indescribable feeling.

<em.”We’ve got to make a decision. Leave tonight or live and die this way.”

“Remember when we were driving, driving in your car, speeding so fast felt like I was drunk. City lights laid out before us, and your arm felt nice wrapped around my shoulder. And I had a feeling I belonged. I had a feeling I could be someone.”

“Raining in Baltimore” by Counting Crows

To this day I think this is the saddest songs I’ve ever heard, but I love this song. I think that Adam Duritz was in a state of transition and depression when he wrote it, and it will resonate with anyone who is going through the same. I interpret the underlying theme to be the feeling of missing something and wanting to get out and go somewhere, and it’s for that reason it made our traveling playlist.

“These train conversations are passing me by, and I don’t have nothing to say. You get what you pay for, but I just had no intention of living this way.”

“There’s things I remember, and things I forget. I miss you, I guess that I should. 3,500 miles away, what would you change if you could?”

“And I wish it was a small world. Because I’m lonely for the big towns. I’d like to hear a little guitar. I guess it’s time to put the top down.”

Want to listen to the songs or have some of your own to add?

Join the collaborative playlist on Spotify: