Gerard Pefung was born in Cameroon, Africa, but today he calls Omaha his home. A talented and celebrated local artist, he’s inspired by both hip hop and the rich traditions and vibrant culture of Africa. He also serves as a mentor to inner-city youth, helping them to find and express their voice through the arts. His own art serves a strong purpose: to be the voice of the people and expose societal struggles and truths. 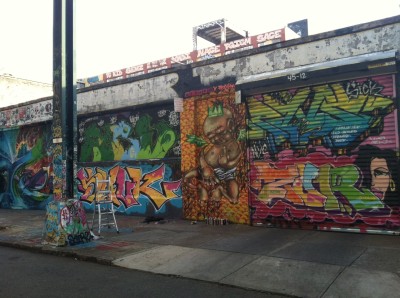 Say Hey There Music recently sat down with Gerard to discuss everything from what it was like discovering hip hop as a kid in Africa to his experience painting at the world renowned (and recently destructed) graffiti grounds 5pointz in New York to what his work represents.

Say Hey There: You first heard about hip hop living in Africa. When we were kids, the internet didn’t exist. How did this culture born on the East Coast in the United States make its way to a developing continent?

Gerard: That’s a good question. You know, I’m here. The stuff that’s popular here may not necessarily be in another continent. When I go back there, I’m telling my family and I’m telling my friends, I’m like, “Listen to this, this is nice.” Cousins will send stuff to their brothers. It’s weird how stuff moves around, all I know is that we would trade cassette tapes and sometimes listen to it on the radio.

Say Hey There: How do you think hip hop differed in Africa? What’s the African twist?

Gerard: We did b-boying, emceeing, we did everything. Battles, freestyles, all of that. But the content might not be the same. We rapped about the struggle of being a person trying to make it.

Say Hey There: Is that where you learned about graffiti and got into painting?

Gerard: Being there, yeah. Diego and Gerard in front of their mural at 5pointz

Say Hey There: On graffiti, you have said: “It gets a bad rap, but is it as bad as all these other crimes? I don’t agree with vandalism, but you have to choose your battles. The writing on the wall is the voice of the city. It exists in Italy. It exists in Egypt. They did the same thing, they wrote on their walls.” That’s profound. It’s the truth, but it’s a very unique perspective, and I’m not sure that people have thought about it that way. You are someone who has painted at 5pointz. Can you tell us about that experience?

Gerard: It was maybe three years ago. It happened because one of my friends, Diego, really wanted to go to New York. I had been there before, and we had some mutual friends out there that wanted us to be a part of a show, so we went out there and met some people who introduced us to other people and we were introduced to Meres. He’s an artist and oversaw the building and made sure the right stuff was going up on the wall. We talked to him, we talked a little about us, and he got us a spot on the wall.

Say Hey There: What did you paint?

Gerard: You really want to know? (Laughs.) I think I have a picture of it somewhere…I had a painting partner, Diego. On the way to it, we almost got arrested because the taxi driver did something.

Say Hey There: What did he do? So you didn’t actually almost get arrested, he did?

Gerard: No, we almost did though! The taxi driver accidentally hit the panic button and so the cops pulled us over. We had a bunch of spray paint in the back of the car, and they were questioning us for graffiti and stuff. It was a crazy ordeal. It was the craziest, most intense week ever.

It was a crazy ordeal. It was the craziest, most intense week ever.

Say Hey There: The last time we talked you told me: “Hip hop is the inspiration, but the message is about the under-privileged, their voices are not being heard. There are a lot of things happening in poor communities, a lot of realities that are not being shared.  A lot of abuse of power. Injustices. I can’t drive through North Omaha without getting pulled over. That gives me my passion, my drive. I want to be able to use my voice to help the people. ” Can you talk more about the injustices you see occurring today in Omaha that you want to bring to light?

Gerard: There is a lot of abuse of power by the people with authority. The common person’s voice is not being heard. People are not being given the reality. A lot of it gets downplayed and sectionalized. You can talk about the structure of it all. The people who run the corporations run the city. And they make the decisions on how things are going to get taken care of. But when it trickles down, the decisions affect the actions of the lowest class. So then when people are behaving in a certain way, it’s like where are those problems really coming from? You know what I mean?

There is a lot of abuse of power by the people with authority. The common person’s voice is not being heard. People are not being given the reality.

And policies people make have short-term vision to benefit them. It affects the jobs.I think the kids go out and tag because their parents aren’t at home, because their parents are working two jobs to feed them. Who’s going to be there to tell them what to do and how to be a civil, responsible person? But why is it this person’s parents can’t make enough money, even though they are hard workers, to make ends meet?

The people who make the laws only make the laws to benefit them for their two terms or one term so that they can say “Hey, during my term I was able to do this.” But it affects this man’s life for ten, twenty years. And then later on you’re going to say that this man is a problem. When, to be honest, what did he do? But not enough people are aware that this is what happens.

Some of those things will never change, but a few people can go around educating people to say you are human, you have the same abilities as anybody, you can be your own advocate. But it comes with paying attention, learning, reading, educating yourself. It just takes the few people to teach the general public to educate and tell people to speak up. If something is wrong, speak up. I think that’s basically the way things could turn around.

If something is wrong, speak up. I think that’s basically the way things could turn around. 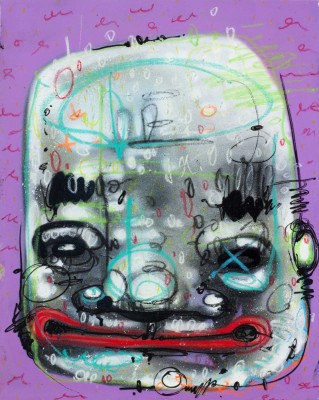 Say Hey There: There’s no one thing that would probably solve the problem. This is a vicious cycle that has been going on for a long, long time. It takes a lot of effort and focus to reverse something like that. But there are organizations out there, like people like you who will go and do art with kids who are into graffiti, or Outward Bound where they take kids and show them what it’s like to do things outdoors. So there are programs that exist that try to steer kids in the right direction to hopefully, ultimately, try to break the cycle. If you could pick just one thing to change, what do you think would be the most powerful from your perspective?

Gerard: That’s a tough one. I would have to stick to my area of expertise. I would have to create more awareness. Self-expression. Open room for conversation. Clarity, you know what I’m saying? An open, honest, platform for solving or discussing issues. Everybody’s different. That’s what makes it interesting. That’s what makes it fun. A law is a box, if we want to coexist with each other…we’re all imperfect, but the law is perfect. It defeats the purpose.

A law is a box, if we want to coexist with each other…we’re all imperfect, but the law is perfect. It defeats the purpose.

Say Hey There: How does you art help give people a voice?

Gerard: This is what I’d like to think it is: I’m human. I’m blood. I have the same problems. I have to deal with the same issues everybody deals with. I’m documenting my time here. I’m documenting the people around me, the conversations I’m having. This is a perfect example. You’re writing about these issues. Who says five or twenty years from now we won’t be like, “What were doing in 2014?” And they’ll find your article. I feel like that’s one aspect of it, but also, I have a platform. I have people interested to listen. I am able to express it, and that’s the role of my paintings. It comes from these conversations, it comes from these people, it comes from an earnest desire to be better.

Say Hey There: What do you love about hip hop?

Gerard: Hip hop is me! That’s why I love it. It’s everything It’s attitude, it’s about coming up, it’s about embracing what you got and being comfortable with it. It’s about never stopping, always being youthful. It’s about going to another planet and meeting some new people who can vibe with you on the same level. (Laughs.) It’s about discovery. it’s about moving with finesse. It’s about being soulful.

Say Hey There: Do you have any favorite inspirations or mentors in the hip hop community?

Gerard: Oh, there are so many. Biggie grew on me, I like Biggie. He was that presence. But if you go way back in the day you had Big L. I like a lot of East Coast guys, like your Rocksteady crew. You had…

Gerard: DJ Kook Herc, merging the culture on the dance floor. On the West Coast, I like Snoop.

Say Hey There: I could party with Snoop.

Gerard: I could totally party with Snoop.

Support the movement and take a moment to follow Gerard below.