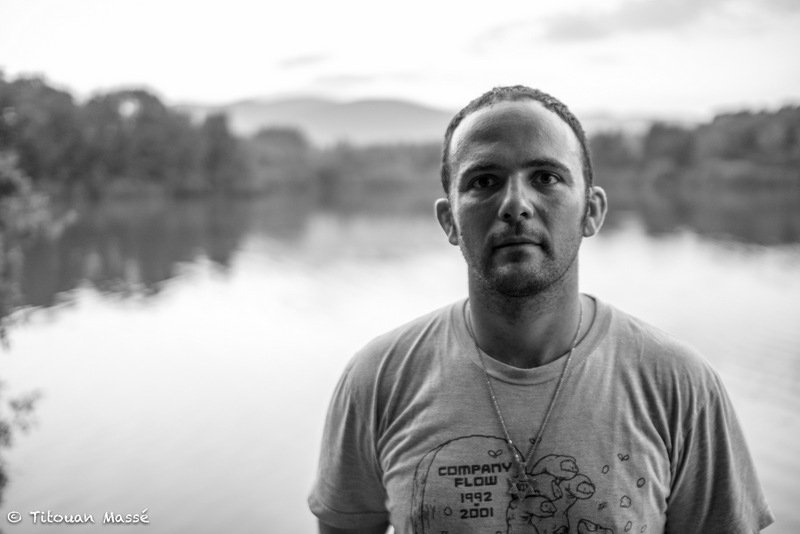 This weekend, I was fortunate to be able to phone Kosha Dillz and chat about his new album Awkward in a Good Way as he drove around LA. Here’s what we talked about.

Read my review of Awkward in a Good Way »

Say Hey There:  The first thing I want to talk about is the theme. Awkward in a Good Way is certainly a title that stands out in a crowd. Can you talk a little bit about the subject matter and what inspired you to make this album?

And the album cover is sort of this hard rap picture, right? But I’m by this really nice lake in France. And I’m posing how rappers would pose and there would be the stereotypical graffiti in the background, but instead there’s this picturesque lake. Everything is slightly off. The songs that I have, the titles, the performance—everything is awkward in a good way. 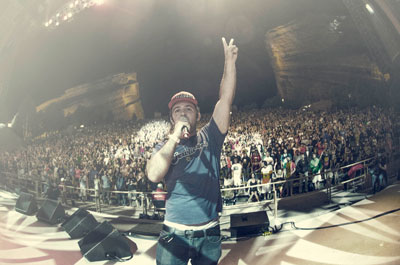 Even the dark songs are sort of funny. Like “Tupac Gone Fishin'” is a dark song, but the title is sort of like, what the hell? The song “Fwends” is a freestyle, and all that stuff about Kat Williams is true. There’s a lot of funny stuff there. People wouldn’t believe some of the things that happened. It’s something a lot of people can get behind. A lot of people think they are awkward.

Say Hey There: Your album was the first release on Murs 316. Can you talk a little about that and what it means to you to be part of the label?

Kosha: It’s cool. I don’t think people would assume that Murs would attach himself to me. A lot of rappers try to attach themselves with him for Paid Dues, because they know that’s the premiere hip hop festival to be a part of that will catch the attention of the community. If you’ve done Paid Dues, you’ve done something with your career, you’re really official.

My producer has known Murs since high school and they’ve done work together, and Murs had me out on a few dates and had me play Paid Dues, and I’ve really earned my keep over the years. And once he got to know me, I think it was cool. I was like hey, when you do this label, I want to be the first, because I want to come out swinging. And the album got premiered on Billboard, you know what I’m saying? A lot of people follow him. And he’s known in so many facets, from film to underground hip hop to punk rock, so I was really happy to be part of it. It was a cool thing for me. I’m really excited about it.

I want to come out swinging. And the album got premiered on Billboard, you know what I’m saying?

Say Hey There: What’s your songwriting process? Are there certain things you need in front of you in order to write or feel inspired? What’s it like for you when it’s time to put pen to paper?

Kosha: It’s sort of a time constraint. So I’ll be like “Hey, we have to make this, and I have to do it now.” It’s very OCD-related. And that’s how me and Belief have worked together on our two albums. For me it works. If a teacher is like, “Hey, you need this paper in by Wednesday,” I’d be like oh my God, it’s Tuesday, I gotta get it done. And that’s the way it works with the album.

A lot of it will be writing it in the studio, walking around, drinking coffee, you know. I’ll say I need to workout before I write today, and then the whole time I’m running, I’m thinking and thinking and obsessing about stuff. And I do feel that all the things that I’m doing, whether I’m writing barefoot, or writing with these socks on or these shoes, in my mind I think I’m going to write a different kind of song because of it. I really think like that.

And I do feel that all the things that I’m doing, whether I’m writing barefoot, or writing with these socks on or these shoes, in my mind I think I’m going to write a different kind of song because of it.

And I like to be produced. Belief, he knows me on a personal level. I’m always going through some weird emotional thing when I’m with this dude. He knows a lot about me, so we put a lot of this stuff on the tracks.

Say Hey There: So you like to write when you’re in the studio too, and kind of vibe off each other?

Kosha: I hear the beat and do a lot of freestyling. And he’ll catch a lot of it and press record, and we’ll catch a good vibe and we’ll take that and chop it up and say let’s go off this. 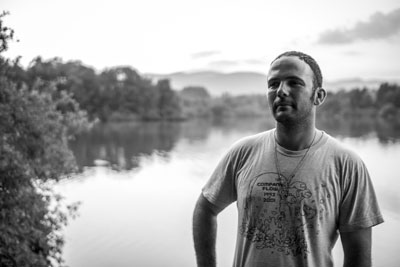 Say Hey There: And you grew up freestyling.

Kosha: Yeah, Freestyling is basically my life. Like the song “Fwends” was a complete freestyle.

The song “Fwends” was a complete freestyle.

Say Hey There: I wondered if part of this album was freestyled.  It has that crazy, spontaneous vibe.

Kosha: A lot of this album was freestyled really. “In Da Club,” we did in ten minutes. That was a funny one. And then we did a little bit of writing, it had to make a little bit of sense. Freestyling is definitely a way to help make a song.  It’s a way to get a lot of dope lines, and then you can build off of that. “Fwends” was like a skit, but it turned out to be a really cool song.

Say Hey There: Right now you’re in LA. You’ve been playing a lot of shows in the South. Are you going on a national tour to promote the album?

Kosha:  I did a tour with Matisyahu which was in the Northeast. I did a Southeast tour. We’re doing Dallas, Houston, Austin, Baton Rouge, Alabama, Georgia, Florida, Asheville, and then I’m going to Israel to do a couple things over there.

Say Hey There: Are you doing South by Southwest while you’re in Austin?

Kosha:  Yeah. I just got some gigs down there. I might do something really different down there. You know, street perform. I might choose not to do any shows. I’ve been doing South by Southwest for so many years, I don’t want to continue doing the same thing unless I’m doing something huge, so I’m doing really obscure stuff to kind of mimic the album.

Say Hey There: You collaborate with Murs on a couple songs and Gangsta Boo on one. Were you all in the studio at the same time?

Kosha: No, Gangsta Boo laid her verse, and when Murs heard that he wanted to get in on it.

Say Hey There: I bet that was an amazing experience.

Kosha: It was cool. I love what she did on the song. It was an honor, she’s legendary. Our music is completely different but I respect what she does. It was very suitable to the album title, why not have a song with Gangsta Boo? When people hear that she’s on my album, they freak out. I’m just like, wow, I didn’t realize people would lose their mind to a certain degree.

I didn’t realize people would lose their mind to a certain degree.

Say Hey There: How did you two hook up?

Kosha: I went to see one of her shows, so that was the cool part about it. I connected with her at one of her live performances, and then we went out to dinner and then eventually I convinced her to get into the studio, and she really liked the vibe. We were just enjoying our time together, and then just boom, you know, she dropped the verse; and she did the video too which, I was stoked about that.

Say Hey There: What’s the biggest thing you want people to take away from this album?

Kosha: You know, that there’s depth to me as an artist. I guess it’s not about me, essentially, but you know, Kosha Dillz: Awkward in a Good Way, don’t be afraid to be moved emotionally, and try to dig into the album and ride with it. I’m very proud of it. People were fighting for me to make an EP, and I was like, no. I want to make an album, a 10-song album, and I want it to be the real thing. It was the first album I did in a long time, and I think it’s my best work today. I’ve done a lot of cool, interesting stuff, but from not working with Murs to having him put the album out and him being on some of the songs was a great experience for me. This album is darker, more moving, and the live show from it…we all performed last night in Breckenridge, Colorado and it was one of my best shows. I was really excited about performing the songs. So I guess, it’s an experience.

Don’t be afraid to be moved emotionally, and try to dig into the album and ride with it.

There you have it, folks. It’s an experience.

Catch Kosha Dillz on tour or check out the album on iTunes to experience it for yourself.