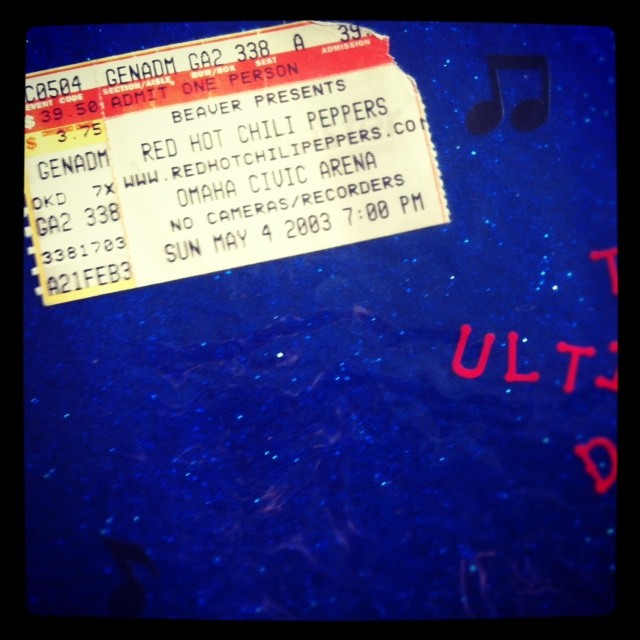 The first music video I remember seeing that emotionally affected me was the video Red Hot Chili Peppers made for “Scar Tissue.” The setting was basically the group, battered and bleeding, driving in a convertible on a lonely highway through what appeared to be a hot, dry desert. It was simple. It was beautiful. I was on the cusp of puberty, and I found it undeniably sexy. I was hooked.

By the time I turned 16, I was a full-blown Peppers addict. Freshman year of high school, I met one of my best friends to this day, Cassie Head, and the epicenter of our close bond was our mutual adoration for the group. We formed our own all-girl band called “Runamuck Fest” (we both played guitar) that dedicated practice sessions to listening to RHCP records and translating Bob Marley songs into Spanish.

When, as sophomores, we weren’t invited to prom by our crushes, we decided to stage what we called “The Ultimate Weekend.” Basically this consisted of listening to rock and punk music, driving around town with no particular destination in mind, and of course attending the Red Hot Chili Peppers concert.

We decided to have an adventure. We did our research weeks ahead of time (or was it months?) and somehow managed to figure out where the Peppers stayed the last time they played a show in town. The morning of the show, we woke up at the crack of dawn and headed for downtown Omaha. Surely the band would be touring around the Old Market, admiring the brick pathways and checking out the local record stores. We, of course, would somehow bump into them, form an immediate connection, and they would invite us backstage. When our plan didn’t pan out, we decided to check out the hotel the Peppers had stayed at before. We walked past the lobby with our heads held high, daring anyone to ask us why we were there. “Us? Why yes, we have a room here. How strange of you to ask.” 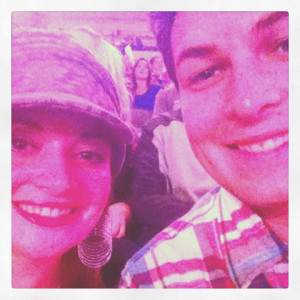 We walked around each floor, our ears nearly pressed to each door as we listened for…I don’t know what, but some sort of sign the band was in our vicinity. “Did you hear that? I’m pretty sure that was John’s voice.” We thought if anyone had a good chance of encountering them, it would be us. We weren’t groupies, and we despised the screaming, crying legions of girls that threw themselves at bands. Surely the music Gods would look down on us and reward us for being authentic fans. We were serious about music, somehow different from everyone else.

Later we would overhear a group of girls who bragged about being at the right hotel at the right time, getting to meet the band in an elevator. To this day I don’t know what we would have done if we had actually met them, and I don’t care. The adventure we had just imagining what we would do is something I will never forget.

Several hours later, Cassie and I found ourselves outside the gated area of the arena where tour buses parked and fans peered through steel bars. There was a small group of about 30 people, waiting for the band to arrive, when the tornado sirens went off. Everyone left to take shelter in the basement of the arena. Everyone, that is, but us. There were a couple of security guards two feet away from us on the other side of the gate. We pleaded for them to allow us through the gate so that we could enter the door 50 yards away. The door we knew would lead us backstage. We begged them for what seemed like an hour, for safety reasons of course, to open sesame. I don’t know if it was out of pity, or because they saw their teenage selves in us, or because they legitimately knew that we wouldn’t move until we got our way, but for some reason they finally gave in. We had made it backstage.

It’s this next part that gets a little fuzzy for me, probably because it was so surreal and my adrenalin was pumping so hard, but I 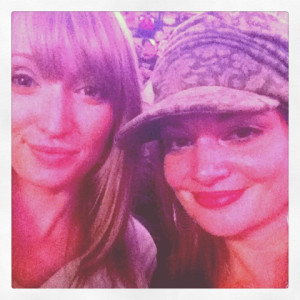 do know that we started crying (for no obvious reason), and I do know that we were receiving some very strange looks from who turned out to be the lead singer of opening band Mars Volta. Eventually we were led down to the basement with the rest of the world to wait out the storm, and finally the concert began.

We started off on the floor, pushing our way towards the front of the stage. Cassie, being much taller and much braver, was a natural in the mosh pit. I, however, started panicking. Approximately 5′ 3″ and 110 pounds, I was swaying with the crowd 12 yards in either direction…my feet not touching the ground. I think that’s right around the time I lost my shoes (I was able to recover one after the show). That’s when Anthony Kiedis practically stopped the show to heroically ask the crowd to be careful and gentle, because there were young girls in the mosh pit. (Was he talking about me?) That’s when a man who I now refer to as “tall man” started paving a path through the mosh pit, leading me to safety. I saw some classmates up in the lower bowl and went up to sit with them.

That’s when the moment happened. A moment so magical, I will never forget it and I swear to you it is not a figment of my imagination. The people around me were seated, but I was standing and dancing. That’s when Anthony Kiedis looked up into the stadium, right in my direction, and smiled. I have a witness. The guy next to me poked my shoulder and said, “Did you see that?” in disbelief. Stunned, I couldn’t reply.

The next day I remember reading a local review of the show that angered me. The writer claimed he had seen RHCP ten years earlier and they had been much more energetic back then. The only criticism of RHCP that I have heard over the years is their changing, “softening” sound. I have never understood that. Doesn’t it make sense for bands to evolve? To grow? Especially over the course of three decades? I like their old stuff and I like their new stuff, everything from “Catholic School Girls Rule” to “Aeroplane” to “Porcelain.” I always like to say that some of my favorite songs are out there, I just haven’t heard them yet. That’s how I feel about the Red Hot Chili Peppers; their music never ceases to inspire me in some way.

The first day I met my husband, we bonded over music. We have different tastes, but it’s something we both hold sacred. I told 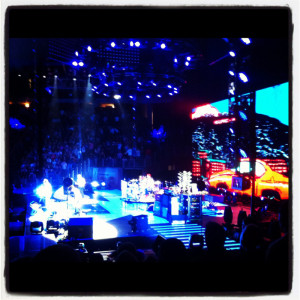 him about my obsession with Atmosphere, Counting Crows, and (of course) the Red Hot Chili Peppers, and he told me about why he loved Pantera, Neurosis, and Nirvana. He gave me several CDs off his label, Imagine It Records, and I showed him my notebooks full of lyrics and played him a few songs I wrote. He told me about an autobiography that Anthony Kiedis had just released, and promised to buy it for me for Christmas. When he followed through several weeks later, I was in love.

Fast forward ten years, and I’m at another RHCP concert. But this time I have more. More appreciation for punk, more understanding of the band and their history, and more appreciation for a good show (they seem to come by rarely these days). I’m also much closer (in proximity) to the band. I’m just 11 rows back in the lower bowl, just to the right of the stage if you’re looking directly at it. The show was even better than I remember it being the first time around. And to that writer who ten years earlier criticized their energy level, I dare you to go up there and rock it out hardcore like they did. My entire upper body is sore just from head-banging.

Flea’s performance floored me. Between his impressive minutes-long hand stand, kick-ass crowd interaction, and the time he took to give our side of the stage some special attention, I’m pretty sure a Flea tribute tattoo is in my future. Not to mention he shared with us that he first learned about hardcore in Omaha, a stop on his Greyhound Bus route from LA to Michigan, in the early 80s on his way to visit a teenage Anthony. As I anticipated, they played old stuff, they played new stuff, and they absolutely killed it. The video and light show was phenomenal, and at one point Chad hoisted himself up on the gigantic light fixture above his drum set and started swinging around.

I love their energy, their vibe, their quirkiness, their history, their art, and their personality. Here’s to hoping they come back our way again soon, because I can’t wait another 10 years.