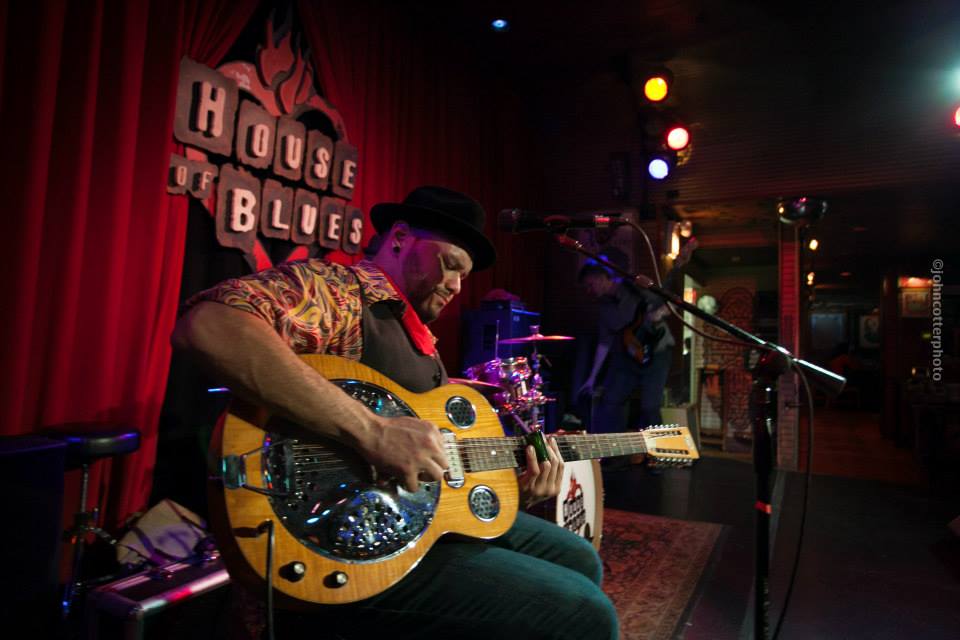 I’ve known Hector for more than 10 years, and to this day I count him among my favorite people. He’s a fellow Virgo, he loves a wailing guitar riff, and he’s a genuinely good person. He’s the guy you can’t walk with around town without bumping into a bunch of people he knows. And while many of us are musicians, he’s one of the few that has the talent, spirit, and dedication it takes to make playing music his full-time gig.

Locally famous for being the lead singer and guitarist of Anchondo—a band with a sound you could describe as a blend between Sublime, The Refreshments, and 311—his most recent project is playing the blues with Alex Mosher on the drums and Carl Brown on the bass as The Hector Anchondo Band.

I recently sat down with Hector to discuss his new full-length album release and plan to help fund the project via PledgeMusic.

Say Hey There: Hector, what made you want to transition from the Southwestern rock, ska-like sound of Anchondo and try something totally different?

Hector: Well, blues was always my first love. Then I fell in love with the ska and reggae sound. I knew I’d always end up playing blues, but I also knew that I should start with the rock band, primarily because it’s older and more widely accepted in the blues world. The blues came a little earlier than expected, because my old band had kind of run its course with members taking time out to raise families. Although that band is still very much alive today, at that point, I was totally lost and I didn’t know what I should do next. I started playing lead guitar for a Motown and blues cover band. It was a blast!  I had been doing that for about a year and started to think about playing blues full-time when my friend, Tim Convy of Redbird Records and the band Ludo, called me up and said, “I want to help you make a Hector Anchondo blues album.”  I replied, “I’m in!” The time was right.

Say Hey There: I know you’re a big fan of Stevie Ray Vaughan. Who else inspires you to play the blues?

Hector: Yeah, I do love me some Stevie Ray, but I have a wide range of who or what inspires my blues playing.  John Lee Hooker is a master at playing heavy blues grooves; then there’s Jimi Hendrix, whose lead guitar is so creative and his vibes are so potent. Another thing that inspires me is visuals. I was recently back at my old farmhouse in Missouri, and I realized how much it resembles the old farmhouses down south where the blues were born; that was inspiring. Then, there’s everyone around me; every friendship and family member, my dog Hannah, and strangers on the street who I encounter and wonder what their story is. I channel all of that every time I pick up my guitar.

Say Hey There: Is this album all originals, or do you put your own twist on some classics?

Hector: This album is all originals. Following the initial conversation with Tim, I sat down that summer and winter and wrote thirty blues songs then headed to St. Louis to sit down with a fine group of musicians and the album’s producers: Tim Convy, Jason Mcentire, Kevin Bowers, and Dave Grelle.  We went through song by song and selected the ten songs that are going to be on the full length album.  It was a great experience.

Say Hey There: Will you be going on tour to promote the album?

Hector: Yes!  I’ve been building up the blues markets in the Midwest for the past several years, and this album is coming at a good time because I’m finally making great headway in the largest blues cities out there: Chicago, St. Louis, and Kansas City.  I’ve been fortunate to have some good things start to happen for me. It’s nice having the full length to put out as the shows pick up.

Say Hey There: What do you want people to take away from this album once they’ve listened to it?

Hector: I want people to have a great experience while they listen to this album. I want them to take away some good, musically-provoked memories or a few catchphrases that they can’t get out of their heads, or just put smiles on their faces.  Lastly, I’d like them to have an urge to come see me play the songs live!

Say Hey There: How does a donation to PledgeMusic help the band?

Hector: Every time someone makes a pledge they get something in return, and it helps the band by going toward releasing the full length album. Everyone that pledges has a part in putting this album out. It’ll also help me keep making music for everyone out there and I plan on doing that until my end of days.

To support The Hector Anchondo Band’s album, pledge to help at pledgemusic.com/projects/hectoranchondo.