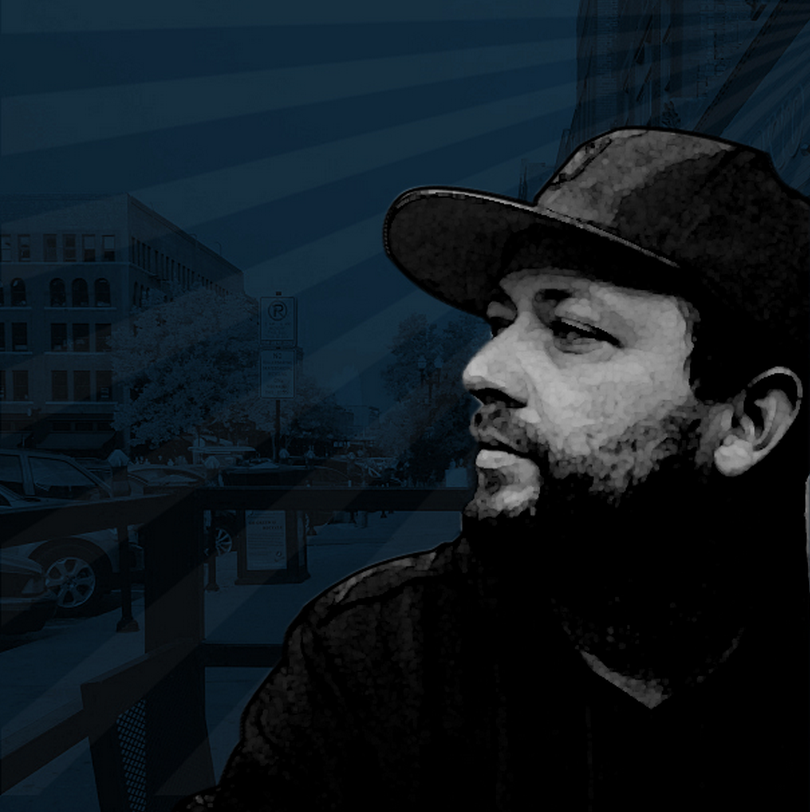 Justin Gilbreath—who goes by Pensive—is a rapper, visual artist, spoken word poet and guitar instructor for Arts for All, an Omaha-based arts program that brings affordable classes and lessons in everything from dance to photography to under-privileged kids.

Burned out on slam poetry after going to nationals last summer, Pensive has been spending recent days focusing on visual arts and writing while working with GooseNeck Productions on a couple projects due out this summer.

In this interview with Say Hey There, Pensive discusses his accidental introduction to slam poetry, how he’s integrating visual arts with performance, his intense writing process, and his believe that God—should he exist—is probably rocking a ghetto blaster.

Say Hey There: Which came first, hip hop or slam?

Pensive: I got into hip hop in high school. I was intrigued by Edgar Allen Poe, I really liked his writing. Then my buddy wrote this ridiculously elementary battle rap, and I was like, pshhh, I can do that, and better. I’ve been writing for maybe 16 years. And hip hop has always captured my imagination. 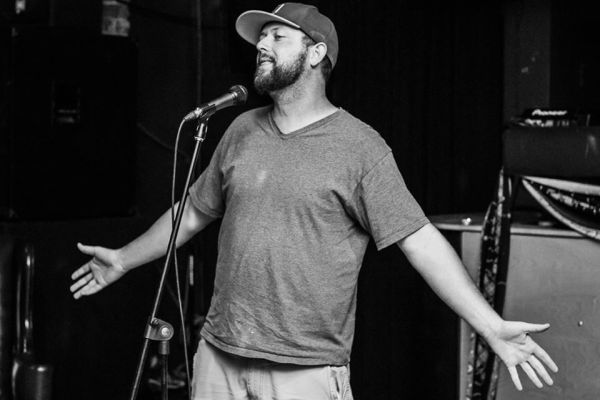 The first time I did slam was, and I don’t know how else to say it, I was really wasted with some coworkers. They brought me to an open mic and were like “We’ll all sign up and do something,” but they only signed me up. I stuck around through it and performed some rap I had memorized and then slowly got introduced to slam poetry. I found a different way to take my writing; to be more honest and truthful about my own experiences.

Say Hey There: Was “Junky” based off a real experience?

Pensive: Yeah, absolutely. With rap and hip hop especially, I think drugs are glamorized. And then there’s the other end, that’s like the media, teachers, and parents that say “Don’t do drugs, they’re so bad.” I wanted “Junky” to sit in the middle of talking about how I’ve had some extremely bad times and extremely good times on drugs. I was more searching for a way to poke fun at rap for its glamorization.

Say Hey There: Last year you were on the Omaha Slam Team that went to National Poetry Slam (NPS) in Boston. What was that experience like?

Pensive: That was incredible. It was absolutely incredible. We essentially qualified to be on the team through different poetry slams, there are steps to get on it, and had to raise money for the trip, and we ended up just, like at the zero hour, getting just enough money to go. We drove out there, it was like a 24-hour drive, but I made some incredibly close friends and saw so much slam poetry that I still gag when I think about a poetry slam. It was way too much poetry. It’s literally slam poetry from one o’clock in the afternoon ’til five or six in the morning depending on how long you can stay awake. It’s a lot. You get hungover after something like that. I just write now. I’ll do spoken word from time to to time. I highly respect the writing aspect of it. The performing and everything…it’s kind of lost its appeal.

Say Hey There: What are the rules for slam? Are there any?

Pensive: There’s a difference between spoken word and slam. Spoken word is more just free form. You can do however long of a poem, however short of a poem. With slam there are specific rules, like it can’t be over three minutes and you’re judged for your poem. As far as the writing aspect goes, it can have structure, but for the most part it’s free write. You can even do prose type stuff if you want. I’ve seen it all. That’s the beauty about spoken word, it’s all across the board.

I’ve seen it all. That’s the beauty about spoken word, it’s all across the board.

Say Hey There: Do you like rapping or reading better?

Pensive: Oh, damn. You know, if it’s performance, then definitely hip hop, but I really don’t feel like I distinguish the two. They’re just two different tools. Hip hop is something that just kind of has an aesthetic value, a playback value. If it’s written well, people will listen to it, and listen to it, and listen to it, and pick up a new thing every time. But with spoken word it’s more direct, in your face, I got one chance to say this and one chance for you to catch what I’m saying. You put a voice to whatever you’re feeling. If you’re genuine and honest, you can really let some pain out, you can be funny, you can be whatever you want.

Say Hey There: What do you like to write about? Judging from your moniker, is it mostly thoughtful, sometimes somber subject matter?

Pensive: Yeah, I would say that. I like to write about everything, but mostly those things that I’ve connected with on a personal level that have happened to me. I’ve been on a kick about writing about past pets lately. I also don’t know why but if I’m writing about something funny, I like to write about the weird shit people do with food. I don’t choose what I write about, if that makes sense. I think it just comes to me. Those are the best things I write, when it just comes to me.

Say Hey There: You used to tag, and now you’re involved with visual arts. How so? 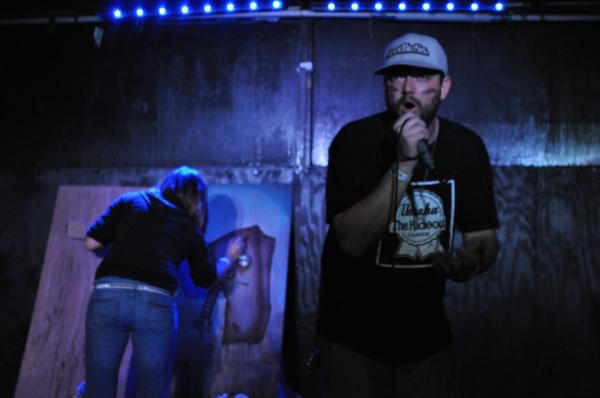 Pensive: Well, that’s always been a thing for me as long as I can remember. I’ve always, always been doodling. I spent much of my school years putting more work in the margins of my homework sheets than under the actual questions. I’ve always done art.

I started tagging when I was 13 and then transitioned into visual art. I’ve actually been going to shows and doing live painting behind performers. I had an artist at my CD release party, and that was the first time I had ever seen anything like that done. But then another set I did I had another live artist behind me, Stephen Kavanaugh, and he is just incredible, and he got me into the idea of approaching more performers and doing live stuff. He has inspired me quite a bit to do live art.

I spent much of my school years putting more work in the margins of my homework sheets than under the actual questions. I’ve always done art.

Say Hey There: Do you have a producer or do you do all your own work?

Pensive: My brother Mike does my beats, and then GooseNeck Productions.

And also, the big project that is close to being done is called Madness Apparatus with local producer Digital Monster. We teamed up and went around and picked up all our favorite emcees. I’m really hoping that will be done by the end of the summer.

Say Hey There: Who can we expect to be on that?

Pensive: I can write just about anywhere, but for some reason, I do my best writing on my home computer after smoking copious amounts of marijuana. With poetry I kind of like to have a clear mind. But the top part of it is energy, energy, energy. I have to put a lot of energy into it. If I know I have something good that I’m writing, often times I’m up running around the house, smoking a cigarette violently, putting it out, then running back in, and type something out, then run back out. If there was a camera watching me while I was writing, I would be committed very quickly. I go insane when I write. I do.

If there was a camera watching me while I was writing, I would be committed very quickly. I go insane when I write.

Pensive: Why do I love hip hop? Damn. It’s like describing—God I hate to keep talking about drugs, but you know, it’s like describing to someone what an acid trip is like and you can never quite fully explain it. Hip hop is that way to me. It pulls my bones. It speaks to me. Sometimes if I’m listening to an instrumental, you will not be able to talk to me…I’m just in there feeling every sound, sounds become colors. I think the I love hip hop because it’s the ultimate high. It’s just where I belong. It feels good. I think somewhere if there’s a God, God is rocking a ghetto blaster and two turntables, for sure. That’s my God.

I think somewhere if there’s a God, God is rocking a ghetto blaster and two turntables, for sure.