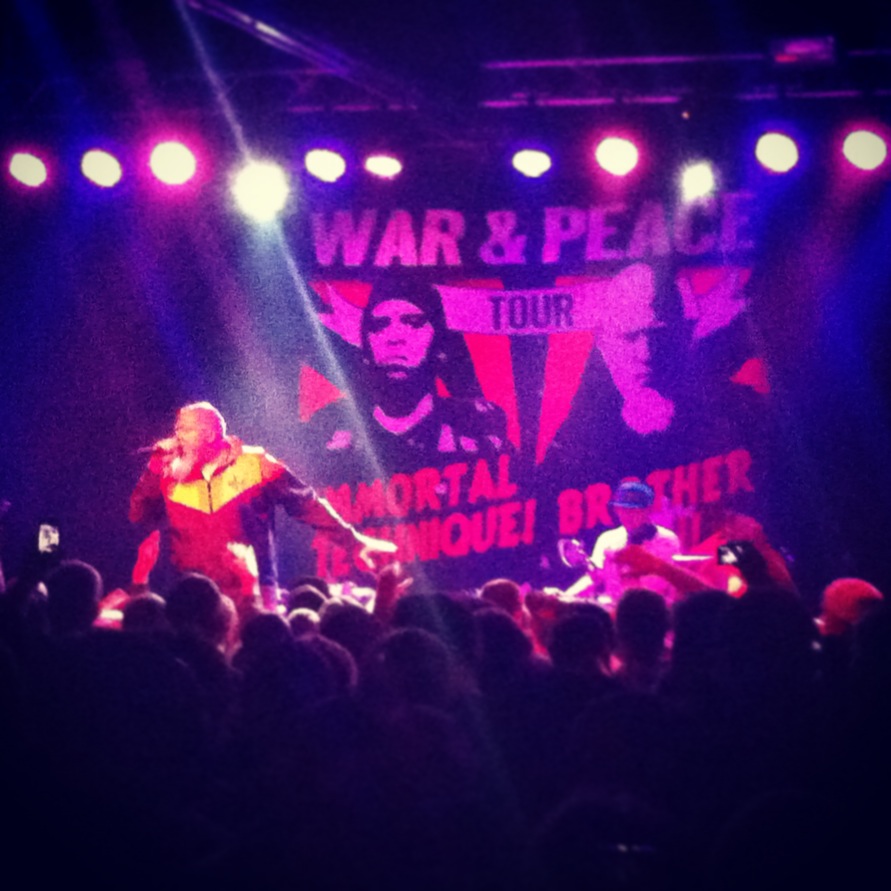 When I found out a few months ago that outspoken hip hop artists Brother Ali and Immortal Technique would be stopping by Omaha on tour this fall, I knew I’d be venturing down to the Waiting Room to check it out.

I’ve been an Ali fan since I first heard “Rain Water” on a compilation album more than seven years ago, and I’ve listened to Immortal Technique casually for about as long. It wasn’t until I heard “Dance with the Devil” for the first time that I discovered the depth of that man’s talent. It’s one of those songs that escalates when you think it can’t get any better. And then it does it again. And again. And as the story gets more and more twisted, the rhymes do, too. Brother Ali is known to fans for expressing his political views through music, and the older he gets and more influential he becomes, the louder his voice seems to grow. And his voice is beautiful. It’s soulful and soothing, like Morgan Freeman’s. There are Ali lyrics that I don’t love, such as the shout-out to Omaha in “Love on Display,” but there are also lyrics that deeply resonate with me. Overall, my impression of Ali is that he’s conflicted, but always honest, and I appreciate that as a listener. Regardless of how I feel about everything Brother Ali says, I was still excited to see him perform again, and I try to make it a point to support Rhymesayers artists when they roll through my city.

The night of the show, my better half and I hit up España in Benson beforehand for some tapas. We see some guys there sporting backpacks and glued to their phones, looking like they’re part of the tour. Later I see them with I Self Devine as I squeeze past them on the sidewalk. Waiting in line, we check out the posters littering the venue windows and notice a flyer for Nirvana playing for a four dollar cover back when the joint was still known as The Lift Ticket. Imagine. 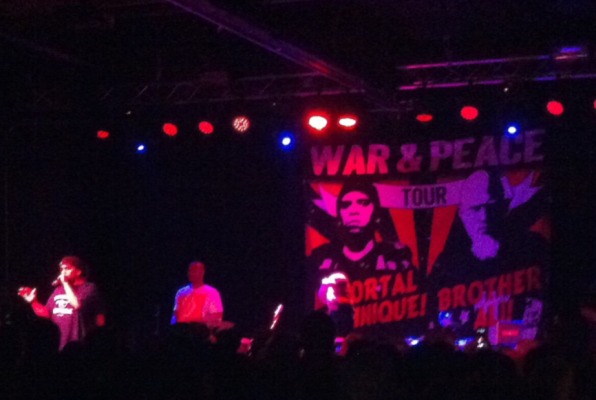 Two 23 dollar covers later, and we’re in the Waiting Room grabbing a table near the front. It’s my favorite venue in Omaha. My kind of vibe. It’s not overrun by hipsters, it has a new sound system, the bartenders are committed to quenching the thirst of the people, and I have many good memories there.

Almost immediately, I hear Murs’s voice blast through the speakers. Nice. The DJ takes the stage about half an hour later and gets the crowd warmed up with the sound effects of air horns and shattered glass. Nice. There’s a host for the night that introduces each act, and each act is talented. Nice.

Immortal Technique comes before Brother Ali, and it’s even better than I could have expected. His infectious energy gets the crowd riled up. He urged the crowd to stand up for the underdog…the stranger you see struggling, the woman getting harassed. Stand up for what’s right instead of being a silent bystander. His message feels valiant and gets our adrenalin pumping.

And he’s unexpectedly funny. He speaks passionately about the importance of fans and being real, and promises everyone an autograph at the end of the show. His attitude is refreshing and appreciated.

By the time Brother Ali comes on, the crowd’s already had their cover’s worth of musical goodness. He opens with one of his older hits, I think it was “Uncle Sam Goddamn,” and the crowd goes crazy. Then something happens. He starts talking about some serious international issues, and not in the same way as Immortal Technique where it was inspirational and you could feel a sense of unity building in the crowd, only to be released through the rhymes he’d start spilling out moments later. It was preaching. It got to the point where he actually silenced the crowd. They were cheering along to what he was saying and he stopped them, asking everyone to hush because he had an important message he needed to share. Like we are ignorant and it’s his calling to educate.

Ali, I think it’s great if you have a message to spread. And I know your message. I buy your albums. I listen to your songs on repeat. I follow you on Twitter. We all have causes we stand for and things we fight for, but if it overshadows the music, isn’t it too much?

We left after a few songs, we were there for music…nothing more. Since when does music stop becoming enough of a friend for us to vent and share and connect? And yet as I sit here and write this, I’m listening to “Walking Away” on repeat. The Champion EP and The Undisputed Truth are albums that I will always hold close. Partly due to the explicitly honest rhymes and partly due to the familial bond I feel with anything Ant produces. So much of what makes Ali, Ali, is that when he has something to say, he says it. And God bless him for it all the same.

“Whatever comes up comes out. We don’t put our hands over our mouth.”
-Brother Ali