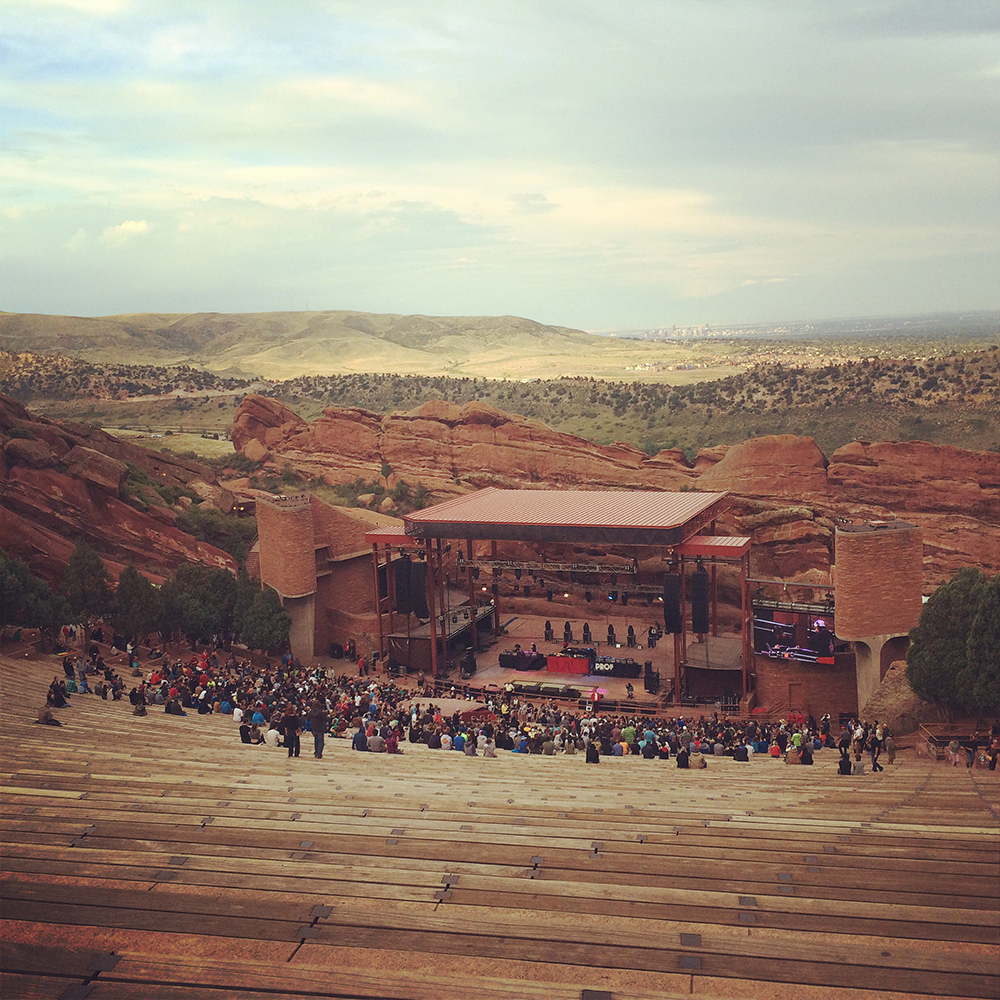 What’s better than an Atmosphere show?

An Atmosphere show at Red Rocks.

What’s better than an Atmosphere show at Red Rocks?

Adding good company to the ticket.

Soon after the release of Southsiders, we found out Atmosphere would be hitting the road, touring once again with Living Legends G&E and taking the opportunity to introduce the world to Rhymesayers newcomers Dem Atlas and Prof.

When we found out the tour would be making a stop at the world-renowned Red Rocks Amphitheater, we didn’t need a fortune cookie to tell us a road trip was in our future. Even though a Lincoln, Nebraska date would later be added, the chance to hear an epic night of hip hop at what’s widely considered the best venue in America wasn’t something we wanted to pass up. It wasn’t our first time hitting the road to see Atmosphere, and it won’t be the last. 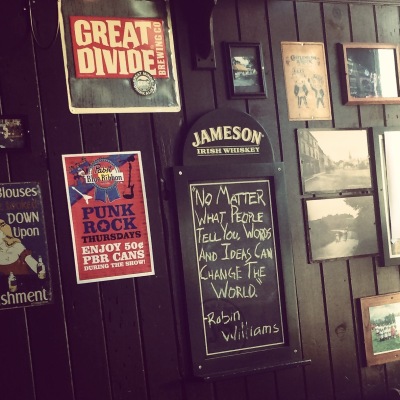 Who says you can’t find anything beautiful scribbled on a wall in a bar?

Fast forward to Labor Day weekend, and it was time to put the pedal to the metal. We packed a cooler and an alternative down pillow and headed west to the soundtrack of America. 527 miles and approximately seven and a half hours later, we arrived in the Mile-High City.

I’ll spare you the gritty details of our day-to-day adventures before the night of the show, but I would like to give a shoutout to Dan, Melissa and the crew over at Sam’s No. 3 for the hospitality. The atmosphere felt more like a backyard barbecue with friends than anything else, the mimosas came in deep glasses with healthy pours, and they’re open late nights. I also highly recommend that anyone visiting Denver play the Wizard of Oz pin ball machine at 1-up, ideally after indulging in a treat from the local dispensary.

Travel to the amphitheater from downtown Denver posed a problem. It’s about a 25-minute drive, which equals a hefty roundtrip cab fare. Alternatively, if you take the W line as far as you can, you will end up about 5 miles from the amphitheater. After that, it’s a gamble as far as how to finish the trip. We were told there would probably be cabs waiting outside the train station. Key word being “probably.” There weren’t. It was an unusually busy holiday weekend and the cabs were concentrated on the downtown hustle.

A few hopeful Uber requests later, and we got lucky. An elderly gentleman named Robert was just heading back down the mountain after dropping a group of girls from Minnesota off at the venue (road trip high five!), and we became his next pick-up.

From a virginal perspective, Red Rocks is about as good as it gets. For one, it’s outdoors. Bench-like seating cascades down the mountain toward the stage. Humongous red boulders protect the venue and acoustics. As the evening goes on and the sky darkens, the rocks start to glow with warm lighting projecting onto them from the ground. In front of your seat, there is about a 3-foot platform from which you may rock the eff out. Under your bench is an area where you can safely store your things without worrying about someone taking them or kicking them out of your vicinity.

The view is…angelic. It takes your breath away, and that’s not because of the altitude. Because you’re on a mountainside, you’re high in the sky. There is a view beyond the stage that only gets better as the sun sets and the distant lights begin to twinkle.

There is a view beyond the stage that only gets better as the sun sets and the distant lights begin to twinkle.

Dem Atlas
Dem Atlas was signed to Rhymesayers earlier this year, just before Prof. Brother Ali recently reflected that Dem Atlas reminds him of why he started making music. I can see why Ali would get nostalgic around him, because they both use music as sort of this let’s talk about the state-of-the-world outlet.

Already having listened to his Charle Brwn EP front-to-back and back-to-front, watching Dem Atlas live was captivating. Better. I could describe him as passionate, but the adjective falls dull in comparison to the experience. 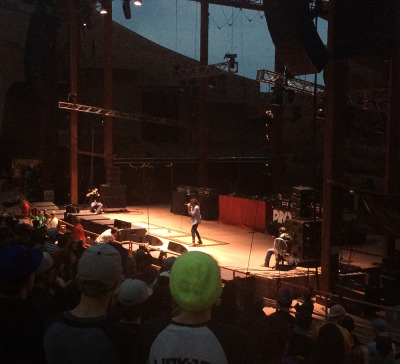 Listening to him is like listening to Bob Marley — you can feel the emotion in every note, whether it’s improvised or a part of the song. He doesn’t just rap. He sings. He cries. He roars. Each note a part of a stronger message.

He doesn’t just rap. He sings. He cries. He roars.

I felt alive and emotional during the performance, a ripple effect difficult to achieve that can only be attributed to someone who really loves getting up on that stage every night and doesn’t overthink how people will receive him.

My message to Dem Atlas is to keep manifesting good vibes. When artists are that naked and honest, they do great things and make great music.

It was a party from the moment he stepped out onto the stage, and if Prof’s occasional giggle toward the nearby crowd was any indication, I’m pretty sure some mujeres close to the stage were showing him something interesting.

He likes to get the crowd rowdy from the start, opening with “Gampo.” He’s a natural entertainer with a lot of talent and range who puts on a great show. He’s also funny as shit.

“Allow me to introduce you to…me.” 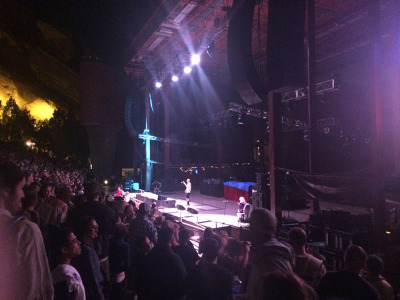 “Raise your hands if you’ve never heard of me.”

He points at all the hands in the air, and says:

Later, towards the very end of the show, Slug would invite Prof and Dem Atlas back onstage to freestyle with him, which was dope. It not only showcased their talent, but also the chemistry between the two newest members of the Rhymesayers fam and the founder.

I was secretly hoping that Ant would come out and play “My Best Teacher” with Grouch or really for any integration between them and Atmosphere considering the several songs these guys have worked on with each other over the years, but those collaborations probably live and die in the studio. 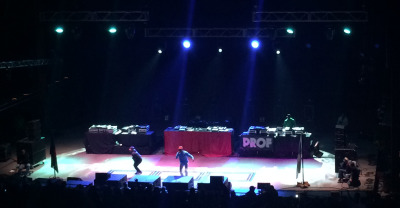 The Grouch and Eligh

G&E’s set list for the night primarily consisted of the more clubby, electronic tracks the duo has created, which appealed to the same crowd that was Getting Cryphy earlier on in the evening. They were accompanied onstage by two entertainers with b-boy flava who would stand, facing the crowd, popping their joints in and out of their sockets. I can honestly say that was a first. Way to take visual stimulation to a whole different level, dudes!

Read our album review that The Grouch once said is “better than most press.” Thank you Grouch!

Atmosphere
One thing I love about Slug is how he switches up the lyrics to maybe whatever he’s feeling at the moment or other little lines he finds wittier or better or just different. Here are just a couple examples:

Clearly a nod to the Michael Brown shooting in Ferguson.

In the background, my man Ant did his thing with help from Plain Ole Bill, who also accompanied them on their last tour. Whoever planned out the set list is my hero. I kept waiting for a song I didn’t love to come on so I could pee (damn you, Blue Moon!), and I never got my chance. Towards the end of the show, we decided to remove ourselves from the heart of the crowd and watch the last few songs from the very top.

When “Modern Man’s Hustle” came on, it got eerily silent. People were just feeling. The music and the atmosphere and the crowd was so overwhelmingly beautiful that it felt like a movement. There are few moments in this world that you want to really live in and capture every sense of so that you can revisit it later as a memory in all its vivid detail, and that was one of those moments for me.

There are few moments in this world that you want to really live in and capture every sense of so that you can revisit it later as a memory in all its vivid detail, and that was one of those moments for me.

During “Dirty Girl,” I seriously thought Murs was about to walk onstage. It was the way that Slug was talking about his friendship with him, and I thought to myself, If I were Murs and I could join any leg of this tour for fun, it would be the Red Rocks show. Murs never made his grand entrance, but the fact that a Felt song made the list was a bucket list moment.

Slug’s interaction with the crowd won me over that night. Before they played “Happymess,” he revealed the inspiration behind the song is his wife, before she was his wife (which I’ve long suspected). That resonated with me. Like so many Atmosphere songs, that song came into my life at a time when I could really relate to it. I heard the first few notes and the music did what it does—brought me back. I looked at my husband, who was oblivious to the pensive thoughts that were running through my mind, and I squeezed his hand a little tighter, subtle emotion welling up in my eyes.

Finally, my favorite words out of Slug’s mouth that night were spoken right around the time they played “Happymess”: “We all use this music as a means to escape. To get out. It’s as close to church as a lot of us are going to get. Let’s touch this weather.”

“We all use this music as a means to escape. To get out. It’s as close to church as a lot of us are going to get. Let’s touch this weather.”